Caroline Pearce boasts a resume many of us can only dream about – Dual International Athlete, television presenter, a Gladiator, model, author, business woman, brand ambassador…And whilst the list of achievements is daunting, my chat with Caroline was anything but. We sat down together on her recent trip to Sydney to discuss how she got to where she is, and where it all began.

Pearce, a natural talent in many sports as a child, decided to focus on heptathlon at 13 years of age after her parents received a call from the British Athletics Foundation informing them that their daughter had topped the national rankings in three different events. Although she is a natural talent, Pearce is the first to admit that her success came down to a combination of her enjoyment of the sport and her dedication to training. She jokes that she used to think sprinters and long jumpers have it easy, they’d run one race and have their result, while she would have to run seven events over two days just to achieve her one result, however her dedication paid off as she became not only one of the youngest ever competitors at the England Schools competition, but also worked her way successfully through the age group comps to eventually compete for Great Britain at the European Cup in 2004. 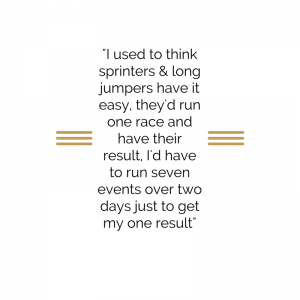 An incredibly self-motivated Pearce focused her attention not only on training and national competitions, but also on her studies where she graduated from Loughborough University in the United Kingdom with a first class honours degree in Sports Science and a masters degree in Physiology and Nutrition.  In 2005 Pearce added another string to her bow after she was selected to compete in the Great Britain national Bobsled team at the World Bobsled Championships in Calgary. Sporting a fantastic weight-to-strength ratio meant Pearce’s powerful physique would come in handy as a break woman.

It’s hard to imagine how one person is able to balance so many activities at such a demanding level and complete studies at the same time, however Pearce explains that Loughborough University is a dedicated sports university enabling students to balance full time studies with opportunities to train.   A typical day consisted of two training sessions, one in the morning usually focusing on conditioning techniques, and a heavier afternoon session.  Training as a heptathlete means sessions are constantly varied with three or four athletics sessions per week including a mix of speed endurance work, pure speed, block work, long jump and hurdle techniques and fartlek training.  Pearce would also complete two or three weight training sessions per week, mixing it up between maximum lifts, circuit based training and mimicking movements she’d be doing out on the track, such as shot-put but with a medicine ball in the gym.  A rest day was reserved once a week and consisted of ice baths, massages and recovery treatments.

After finishing her masters, Pearce stayed on at the university for two more years as a full-time athlete and financially supported herself with sports modelling and commercial work. In 2006 a knee injury ended her athletic career and left Pearce mentally transitioning to life after athletics. Fortunately she was able to recognise how valuable her studies would be and knew that the mindset and skills she’d developed as an athlete, paired with her hard work and discipline would be valuable in any area of work she decided to pursue and demonstrated maturity beyond her years acknowledging that although she wasn’t competing on the international stage anymore, no one could ever take away that fact that she had been an international athlete.

In 2008, Pearce was cast as “Ice” in the re-launch of the Gladiator TV series after one of her friends heard they were auditioning for contestants and suggested she audition to which she ambitiously replied it wasn’t the contestant role she was after, it was the Gladiator! Soon after she received a call from the shows producer saying her agent had contacted them and they’d like her to come in for an audition, the catch was she had no agent, her friend had taken the initiative and posed as her agent to help her get her foot in the door.

Pearce played Ice for one season and the experience piqued her interest in television work, although she knew didn’t want to be a “character” or an actor, Pearce wanted to be able to combine her passion for sport with the television platform, enabling her to still “perform”.  An opportunity to present for ‘LA Muscle TV’ arose and she was given free licence to create and produce content, so with much trial and error, she taught herself how to present, interview and edit her own packages, and before long she had enough footage to put together a showreel.

The next break was as a competitor interviewer in the TV programme ‘The World’s Strongest Man 2010’, which she sourced herself through network connections and by identifying a gap in the market where there were currently no female presenters.  Taking it a step further Pearce went on to team up with Exclusive Sports Media and create her own online series called ‘The Truth: Athlete Insights’, which saw her ask questions no one would usually ask.

Pearce joined BT Sport in 2013 and anchors their live weekly show ‘UFC: Beyond the Octagon’, which rounds out all the latest action, along with guest interviews from the World of the Ultimate Fighting Championship.  She says the role was a learning process and admits to knowing nothing about fighting to begin with but would diligently sit and watch hours of fights to bring her up to speed. Pearce also acknowledges that rather than go for a small role in a big sport, she saw the value in going for a big role in a small, but rapidly growing sport, a decision which paid off as she recently signed a two year contract as a UFC Fight Correspondent for Fox Sports in the United States.

Not one to be limited to excelling in multiple sports and across various television platforms, Pearce is also the author of ‘Better Body Workouts for Women’, which she describes as a ‘personalised approach to fitness’, and has also launched her own high intensity fitness DVD series ‘The Total Body Collection’ and explains they’re very reflective of how she currently works out – high intensity with shorter intervals and recoveries designed to help people get fit at home and focus on body weight or light weights.  Pearce understands that women don’t want to lift heavy weights, and don’t know how to do so, but through the DVD’s, aims to teach women that if you can create a metabolic effect and add intensity, you can change your shape.

With shape in mind, I asked Pearce to reveal to us how she maintains hers and she said that her diet has shifted from her athletic days of being very carbohydrate dense to now mirror more of the Paleolithic principles without being too strict.  You’ll find she always has berries on hand for snacking, an avocado and turkey breast in the fridge, which she says she grills several at a time to throw into lunches and dinners, eggs and brazil nuts for their high selenium content and almond milk for mixing in smoothies and coffee.  Now, as for those abdominals, I can reveal Pearce has confirmed – it is all diet!  If she can encourage you to do one thing it would be to cut out sugar.  High sugar levels encourage fat storage around the mid section and although exercise aids in shaping our bodies and builds cardiovascular strength, how we look comes down to what we eat.

Pearce loves Power Plate training and has spent the past 10 years travelling the globe as an ambassador for Performance Health Systems presenting Power Plate fitness and wellness principles.  The Power Plate technology is what she used to rehabilitate her knee and says that the effects it’s had on her flexibility, mobility, muscle stability and injury is amazing.  She encourages anyone who has access to a Power Plate to give it a try and explains they accelerate muscle reflex responses to the vibration, which means you shorten your workout time by fatiguing faster, in addition to this you’re also activating your stabilising muscles and other muscles that most people wouldn’t be able to consciously contract, which creates a better body shape.

Pearce has recently taken up yoga and absolutely loves it but finds it quite difficult to hold the plethora of poses because she’s so conditioned to moving through a range of motions quickly, pair this with the fact she’s both powerful and explosive and you have yourself a challenge to stay static.  Jokingly she tells me she’s often left marvelling at the other women peacefully transition from the dolphin pose into a three-legged downward facing dog, while her legs wobble underneath her like she’s on the edge of a steep precipice as the lactic acid builds…But as you can imagine, Pearce loves nothing more than being tested and embraces the burn.

A life that seems to fly by at a hundred miles per hour, it’s difficult to see when Pearce has time to relax between work commitments, but when the opportunity presents itself she loves nothing more than spending time with her close group of girlfriends catching up over a champagne brunch, or going out horse riding or climbing and of course, embracing her girly side with a little shopping and pampering.

Having achieved so much is a relatively short time, I asked Pearce what valuable lessons she’d learnt along the way, and the four key points she shared with me I want to share with you. Whether your goals are fitness or career orientated, Pearce’s lessons are profound, relatable and inspiring:

A true inspiration to myself and many others, I know learning Pearce’s story instantly motivates me to aim higher, push harder and not get complacent sitting in my own comfy chair and I hope it does the same for you.  Find out more more about Pearce’s training tips or connect via Instagram or twitter.

Pack your bikini’s girls because my Brit bestie, fitness expert and former international athlete, Caroline Pearce has created a workout series to help us all get into better shape for summer. Appropriately titled ‘Fit 4 […]

My workout muse Caroline Pearce shares her tips on how to keep your fitness in check while on holiday Even with the best of intentions in place, trying to keep fit while on holiday doesn’t […]

Dual-international athlete and former UK Gladiator, Caroline Pearce has been an advocate of Power Plate for over 12 years, and with good reason. After suffering a serious knee injury at the height of her athletic […]