I have a naughty secret I want to share with you, my name is Josette and I’m a recovering chocoholic.  This might seem like a joke but I can assure you chocolate has been my drug of choice for a long time.  It’s been an incredibly difficult cycle to break and I want to share my story with you because I’m sure there are many others just like myself wanting to find a healthier alternative to a not-so-healthy habit.

My chocolate of choice has changed constantly and I often became quite creative with the ways I consume it. Lindt chocolate squares spread with peanut butter became my version of a peanut butter cup, in reality it’s as good for you as buttering your bacon.  Other times it’s been strawberries covered in Nutella, convincing myself that I was putting some goodness into my body in the form of a strawberry,  and that Nutella wasn’t really ‘chocolate’, after all it’s a Hazelnut spread right? But what I do know is that the quantity I was consuming on a daily basis was definitely not helping contribute to my desire for a summer six-pack.

WHY IS CHOCOLATE SO ADDICTIVE?

Most people use the term ‘chocoholic’ loosely and as a humorous play on their love of this naughty-but-nice treat, however there is some scientific evidence to suggest chocolate can be addictive and why our bodies crave it. Chocolate is high in both fat and sugar, two components commonly associated with food addiction, and when we eat chocolate our bodies release a chemical called serotonin, which makes us feel ‘happier’ for a short period of time.  Studies in the US  also found that chocolate, the number one food craved by American women (no surprise) causes the brain to release endorphins, a natural hormone responsible for generating feelings of pleasure and promoting a sense of well being. That’s a double-whammy of feeling super happy after eating chocolate right there!

Chocolate also contains magnesium, which helps to alleviate muscle cramps, chronic pain and poor sleep; it’s also a common supplement women take due to their fluctuating hormonal levels, particularly around their monthly cycle. Chocolate is also rich in flavonoids, powerful antioxidants which help protect our cells from damaging free-radicals.  However not all chocolate is created equal and the more highly processed the chocolate is, the less flavonoids it contains, which is one reason why dark chocolate is always recommended over other varieties.

HOW I BEAT MY CHOCOLATE ADDICTION WITH RAW CACAO

Sarah Wilson, author of the cult phenomenon and best-selling book I quit sugar, gives an easy-to-understand explanation of what raw cacao is and how it differs from traditional cocoa. “Raw cacao is made by cold-pressing unroasted cocoa beans. The process keeps the living enzymes in the cocoa and removes the fat (cacao butter).”

In layman’s terms this means cocoa powder is raw cacao that’s been roasted at high temperatures. However the roasting process changes the molecular structure of the cocoa bean and sadly lowers the overall nutritional content.  So if you’ve been wondering why you should consume food in it’s most natural state the way mother nature intended,  this is the reason you’ve been looking for!  The chocolate we buy in the supermarket starts off as raw cacao, but to make it more palatable, manufacturers add fat, sugar and a number of other components to entice the tastebuds.  Unfortunately these additives also provide our bodies with a high number of calories and can negatively impact our health including increasing the risk of obesity and diabetes.

As I felt my chocolate consumption was getting out of hand, I made a decision to find an alternative way to satisfy my craving, but in a much healthier way.   I became quite aware of how my body felt and reacted when consuming different types of foods, and even though chocolate was a satisfying treat for me, it left my stomach often bloated and slightly uncomfortable due to its high sugar content.

I started experimenting with raw cacao powder by adding it to my smoothies, but because raw cacao is incredibly bitter in it’s most natural form it needed something to sweeten it up, so I added a banana into the mix. Banana’s contain fructose, which often gets a bad rap, but what professionals are referring to is the fructose added to food, when it occurs naturally as it does in bananas, it brings to the table a whole mix of healthy vitamins and minerals including fibre, potassium and vitamin C.  Banana’s really are nature’s candy and because they’re a low GI food, they’re broken down and absorbed more slowly into the blood stream meaning your blood sugar levels don’t spike.  This in turn helps to keep those hunger pangs at bay for longer and helps provide a gradual release of energy between meals.

From there it really just came down to trial and error; adding different amount of ice and almond milk, occasionally some natural yoghurt.  But what amazed me about this whole experimental process was how quickly my cravings for chocolate subsided.  A life-long habit literally gone in days.  My smoothie creation was able to fulfil whatever need my body had for chocolate, but in a much healthier way. Aside from the aesthetic benefits of actually losing a little weight, my stomach feels better for it and my energy levels don’t spike like they did before, often causing me to go back for a second piece of chocolate in the afternoon.

If banana’s aren’t your flavour, you can substitute chopped mango in its place. You can also try adding in 2 TBSP of natural yoghurt and a handful of blueberries.

Place all ingredients into a blender and pulse on high until well mixed.  Serve chilled. 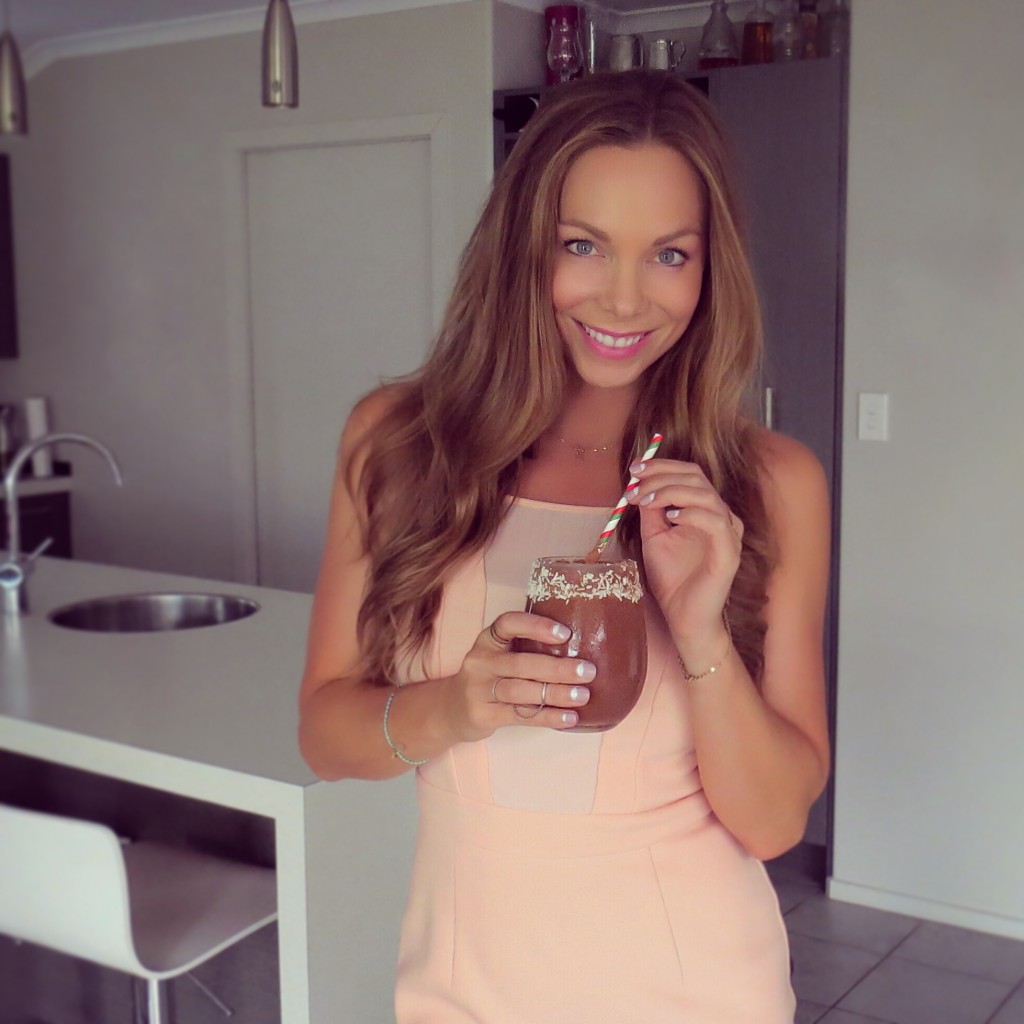 I’ve aimed to keep my smoothie blend as simple as possible to maintain the health benefits and to replace the chocolate in my life.  My blend won’t be for everyone, it is quite rich and mimics a velvety smooth dark chocolate bar melting in the heat, so if you don’t quite exhibit my decadent tastebuds just add a little less cacao powder.   But remember it’s about getting creative and adaptation; if you are looking to make positive changes in your life and happy to experiment with different foods, please give it a try and share the love! Whether you experiment with my smoothie as your base and re-create it into something different, or you’ve already invented your own award-winning cacao smoothie, I’d love to hear from you.

Raspberries are one of my favourite summertime treats, not only are they packed with antioxidants, which protect your body against inflammation and free radicals, but they’re full of fibre helping you feel full for longer. […]

I love the idea of eating ‘clean’ and in theory it seems easy, but if you’re like me and occasionally time poor, or love to eat tasty food but don’t want to spend hours in […]